How Storytelling Unlocks Our Massive Capacity For Sustained Attention 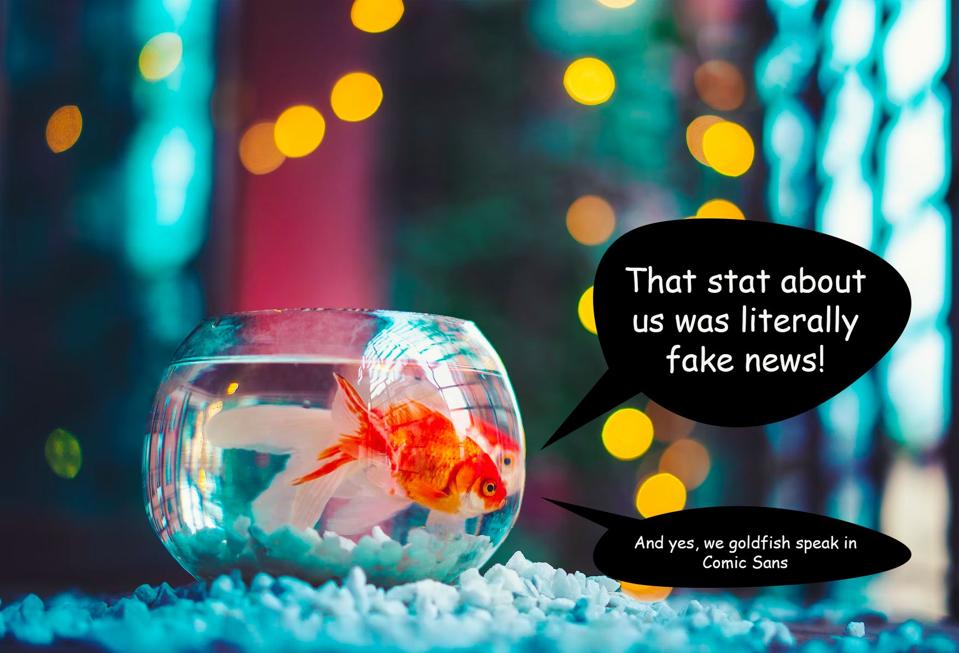 In 2015, the Internet blew up with a shocking new statistic: "humans have an 8-second attention span. Less than that of a goldfish! And it's getting shorter!

Time, The Independent, and even the New York Times Opinion section repeated it. Marketers swarmed to Twitter's advertising platform, the Internet's natural hunting ground for credit card-wielding goldfish. Conference keynote speakers gleefully put stock photos of goldfish in their slides.
It was even reported that the NBA was considering shortening games due to audiences' shortening attention spans.

These quick-hit thought pieces and the umpteen follow-on blog posts of snackable content all referenced "research." The more reputable news outlets specified that it was a study by Microsoft's Advertising department which surveyed 1,200 Canadians about their Internet habits.

But it turns out that the attention span statistic itself didn't come from that survey.

Someone on the Microsoft Ads team found it on a website called Statistics Brain (now rebranded as Statistic Brain), which at the time was an SEO website masquerading as an academic institution. This website indeed had published the 8-second stat, citing two sources. But upon inspection, one source was an analytics report about 25 people who quickly left websites they didn't like... in 2008. (An incredible logical leap from there to the goldfish claim.)

An enterprising writer from the BBC unsuccessfully pushed Statistics Brain to prove its assertion, then talked to scientific researchers who actually study attention span and concluded: this statistic is completely untrue.

Microsoft has since taken down the report from its website. Statistic Brain has since created an infographic about a non-scientific experiment meant to prove the misleading 8-second stat post-facto.

And the truth is laid bare: the “news” that humans have goldfish-level attention spans was fake.

According to actual science, humans have much longer attention spans than goldfish - UNSPLASH

The Company That Could Have Told You That Goldfish Statistic Was Fiction The Whole Time...

If we were going to fight stats with stats, there's one company that has had all the counter-argumentary firepower in its arsenal the whole time Statistics Brain's false stat was being proliferated around the web: Netflix.

Netflix famously tracks almost everything its viewers do. And all that tracking tells Netflix that people pay attention to good movies and series for a lot longer than 8 seconds. They even know when the average person will hit the tipping point and be likely to finish an entire season. (It's episode 4 of Kimmy Schmidt, and episode 2 of Breaking Bad, FYI.)

Two years after the bogus "goldfish" stat came out, Deloitte released a report saying that 73% of people had binge-watched a show, meaning they'd watched 5 hours of content in a single sitting.

If anything, one could argue from these statistics that the human attention span is increasing.

That would be as unscientific a takeaway as the goldfish thing. But the point is, humans, inarguably, have the capacity to pay attention to things for long periods of time.

There's a big difference between "actively trying to pay attention" and "deliberately dividing your attention."

When you listen to a podcast while driving to work, you're specifically dividing your attention. Or rather, you're alternating what you're focusing on (driving or listening) while paying a low level of selective attention to both.

When you browse social media on your phone while watching TV in the background, and you tune in every once in a while to a scene or joke, you're paying selective attention to one thing while mostly paying attention to another.

Advertisers know that when they're trying to reach you with a message, they have to get you to jump out of whatever you're intentionally paying attention to, so you can unintentionally pay attention to them. That's why commercials tend to be louder than the show you're watching—and why good ads hit you with novelty or familiarity, two things that pique your brain's attention.

And some things, rather than simply getting us to selectively pay attention, can actually induce sustained attention. Deep work (when you get into a state of creative flow), for example, can hold one’s attention for long periods of time.

But one of the most reliable mechanisms for sustaining attention—according to actual science—is storytelling.

What Science Actually Shows: Storytelling Induces "Immersion" In The Brain

Have you ever been watching a great movie, then suddenly a noise in your house snaps you back to reality? You were so sucked in that you forgot that you were sitting on a couch, watching a movie? That feeling of being completely captivated is called immersion.

For the last 20 years, scientists like Dr. Paul Zak have been studying the experiences that induce this immersive state. In general scientists have observed that when more of our brains are active in particular ways, we pay attention and encode more into memory. And good stories tend to check all the boxes. But the big epiphany for Dr. Zak and his neuro-technology company (which is actually called Immersion), is that immersive storytelling releases the empathy-related chemical oxytocin in our brains.

For example, when we encounter a story that we can relate to, our brains pay attention. We subconsciously grasp onto, gravitate to the familiar. That's not enough to sustain our attention, though, so a good story hooks us with the familiar, and then uses novelty as a mechanism to keep us going.

And when you weave those things in combination, you can string together a longer attention span.

What Humans' Large Capacity For Attention Means For Business

The goldfish attention span stat may seem like a harmless example of fake news before fake news got sinister (although history shows that it's been used sinisterly for a long time). But the proliferation of this misunderstanding of human attention span has had a huge impact on the business world in particular (and possibly contributed to the streaming video disaster that was Quibi).

For example, many leaders today mistakenly think that no one will pay attention to a message that isn't ultra quick. And if you believe that, you likely won't include the kinds of information, emotional hooks, and story that can get your audience to care about your message in the first place.

Similarly, marketers and salespeople aiming for 8-second scraps of attention today must lean on punchy, flashy, "just the facts ma'am" kind of messaging. But what they sacrifice in doing so is memory encoding. And you have to hit someone with that kind of message over and over if you want it to stick. Instead, if these folks knew it was possible to sustain their audience's attention, they might actually do just that (Which might make them stand out versus their competitors)

And if you're in the business of storytelling, you might be pressured on various sides to make your "content" more "snackable." Which, if you just spent all the effort to get someone's attention... why would you then just give up on trying to hang onto that attention for longer?

Now don't get me wrong, I think inefficient, sloppy writing is the worst. It's not about making things longer just because.

The point is, if Disney's Andor can get us to watch 10 episodes in a single day, then you can push yourself to tell stories that are a full meal rather than a throwaway snack.

Those are the kinds of stories we talk about and share with people we care about anyway—the ones that sustain us.

Shane Snow is the CEO of the virtual production technology company SHOWRUNNER, and a keynote speaker on storytelling and thinking differently.