Why Psychological Safety Is Essential For Productive Teamwork 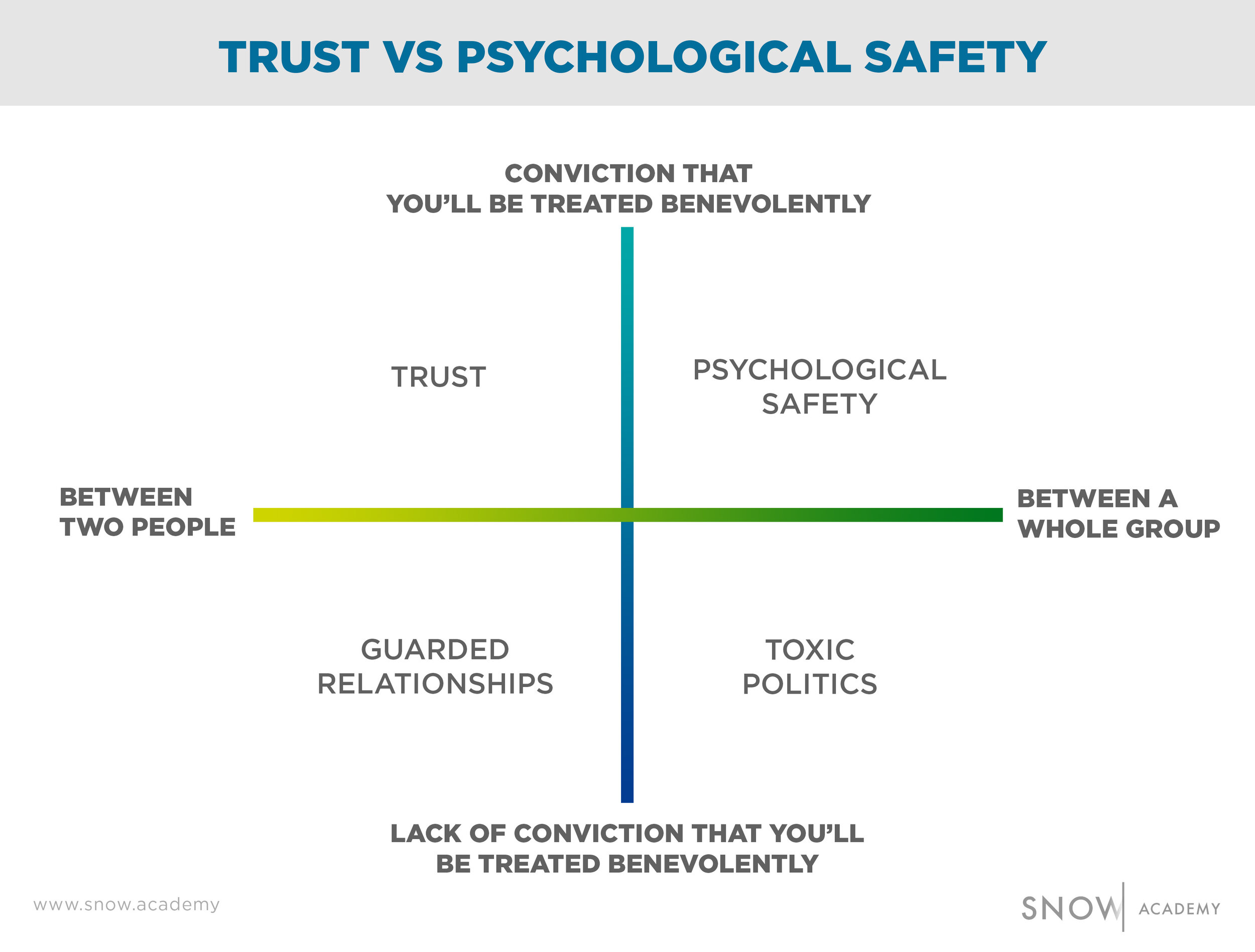 Psychological safety is a bit of a business buzzword of late—in large part because of a big study that Google conducted to understand what its best teams had in common.

But the term actually has been around since at least 1999, when Dr. Amy Edmondson of Harvard University published this influential paper on the subject. (And even then, the concept of non-physical “safety” at work had been explored in business research well before.)

In her study, Dr. Edmondson proposed that regardless of its makeup, a team’s success will largely boil down to its members “tacit beliefs about interpersonal interaction,” and whether they have “a shared belief held by members of a team that the team is safe for interpersonal risk taking.”

In other words, if you can take risks without your team beating you up, you’ll be more likely to succeed. That’s what psychological safety is about.

But what exactly does “taking interpersonal risks” even mean?

All of those are risks you could take.

That can’t possibly be what psychological safety means. Some of those risks actually make other people feel psychologically unsafe. Or grossed out. Or disrespected.

What Psychological Safety Does Not Mean:

Psychological safety is an exciting concept. Unfortunately, in our excitement about the benefits of “feeling safe at work” and “being able to take risks,” many of us are guilty of swinging the pendulum too far and actually creating counter-productive environments.

Take my own screw-up, for example. Several years ago I held a series of “culture talks” in my company around the idea that I wanted everyone to “feel comfortable” at work. I recognized our growing demographic diversity, and I wanted to make sure that the team continued to treat each other well even as they became more of a merry band of misfits than a uniformed army of soldiers.

The thinking behind my culture talks was solid, and based on the psychology and history research I was doing for my book Dream Teams. But what I learned soon after in my research for the book is that the idea of making a team environment completely comfortable was at odds with growth and problem solving.

If you stay completely comfortable at the gym, your muscles will never grow. A great leader’s job is to help people combine their different ingredients and push further than they could go on their own. That is inherently uncomfortable.

This ties in to the concept of psychological safety, because it gets at the flawed logic that many leaders intuitively bring when they want to create a safe environment:

Do you see the cycle?

1) Safety is not the same as comfort

To return to the gym analogy: a good fitness trainer will help you to safely exercise and grow your muscles. And you will be uncomfortable. But you will be safe.

The job of a leader is not to protect their team from discomfort. It’s to protect them from harm—and to help motivate them to push through the discomfort and harness it for growth.

As NYU moral psychology professor Jonathan Haidt and his co-author Greg Lukianoff put it, “A culture that allows the concept of ‘safety’ to creep so far that it equates emotional discomfort with physical danger is a culture that encourages people to systematically protect one another from the very experiences embedded in everyday life that they need in order to become strong and healthy.”

As Haidt and Lukianoff meticulously documented in their book The Coddling of the American Mind, “the meaning of safety underwent a process of concept creep” in the 21st century.

This mainly came from college campuses, where well-meaning students and teachers began including “emotional safety” as the same thing as physical safety. This makes it possible to say that any idea that someone has—or even the presence of someone who makes you feel emotionally bad (aka triggered) actually makes you unsafe.

When this conflation gets brought into a team environment under the mistaken notion that emotional safety is part of psychological safety, it actually weakens individuals and the team. As CNN’s Van Jones put it to University of Chicago students in 2017:

“There are two ideas about safe spaces: One is a very good idea and one is a terrible idea. The idea of being physically safe… not being subjected to sexual harassment and physical abuse… I am perfectly fine with.

But there’s another view that is now I think ascendant, which I think is just a horrible view, which is that ‘I need to be safe ideologically.’

Psychology research is clear that the most reliable way to overcome psychological pain and discomfort is not to avoid it; it’s to gradually dimish the effects of discomfort by systematic exposure. “Avoiding triggers is a symptom of PTSD, not a treatment for it,” write Haidt and Lukianoff.

In other words, the more you face cognitive friction, the better you get at not taking other people’s pushback and different ideas personally.

Now of course there’s an important caveat here: if an individual is psychologically in a place where they cannot handle being around people with different ideas than them, or around people who make them emotional because they remind them of trauma—that is a job for cognitive behavioral therapy. This person’s pain is real, and there is help for them.

However, this is a job for a professional, in an individual setting, to work with that person.

When I was in college, a student once climbed a tree and broke his arm. The college responded by declaring a rule: No climbing trees. A better idea would have been to have a talk with that student, and just tell everyone else to be careful. Instead of showing trust in their students, the college said, essentially, “Trees are dangerous. And we don’t trust you.”

3) Taking Risks Only Makes Sense When It Helps The Group

If I feel comfortable enough to bring a loaded gun and put it casually on the conference room table—my doing so actually creates both a physical and psychological danger.

It actually takes more courage to sit with discomfort, coolly look at it, and make a judgment from a big picture standpoint—not from short-term pain-avoidance.

And in order to make it feel safe to do that, we need to reduce some types of risks. As you can see, achieving real psychological safety is not quite as simple as we make it out to be.

The irony of a black-and-white view of psychological safety—and conflating safety with comfort—is that feeling safe enough to do and say whatever you want can actually create less safety. (This is similar to the paradox of tolerance.)

By making it appear safe and comfortable to do anything, we ironically can make an environment dangerous.

In a team environment, what psychological safety actually means that you know that things you say and do won’t be used against you… as long as you’re not being malicious.

Think of it as the opposite of that speech cops give when they arrest someone, with an added “be nice” clause:

Psychological safety means nothing you say or do will be used against you—as long as you mean well. (And it means your teammates will assume you mean well until proven otherwise.)

Now, one of the problems with psychological safety is talking about it and actually having it are two very different things. Just telling people that anything they say won’t be used against them doesn’t automatically convince people that that’s actually true.

That’s why I think it’s helpful to break the term psychological safety apart even further and talk about it in terms of trust.

the difference between psychological safety and trust:

Ultimately, psychological safety is trust among a group, rather than just between two people.

This means that the bigger the group, the harder it will be to maintain psychological safety. You must have trust in everyone in the group in order to be able to go out on a limb.

Framed this way, what it means to be able to “take risks” becomes a little more concrete. Because we know that trust is earned by showing three things—Ability, Integrity, and Benevolence—although only benevolence is truly a deal breaker when it comes down to it. No amount of skill or ability can make you trust someone who you don’t think has your best interests at heart.

The safety to take risks doesn’t mean it’s now okay to do any awful thing—because what psychological safety actually is is a commitment to treating each other charitably—in both directions.

In a group where everyone treats each other charitably, the following will happen:

In other words, if you want a group to have psychological safety, the #1 thing you need to do is to get people to care about each other.