How To Have A Productive Debate 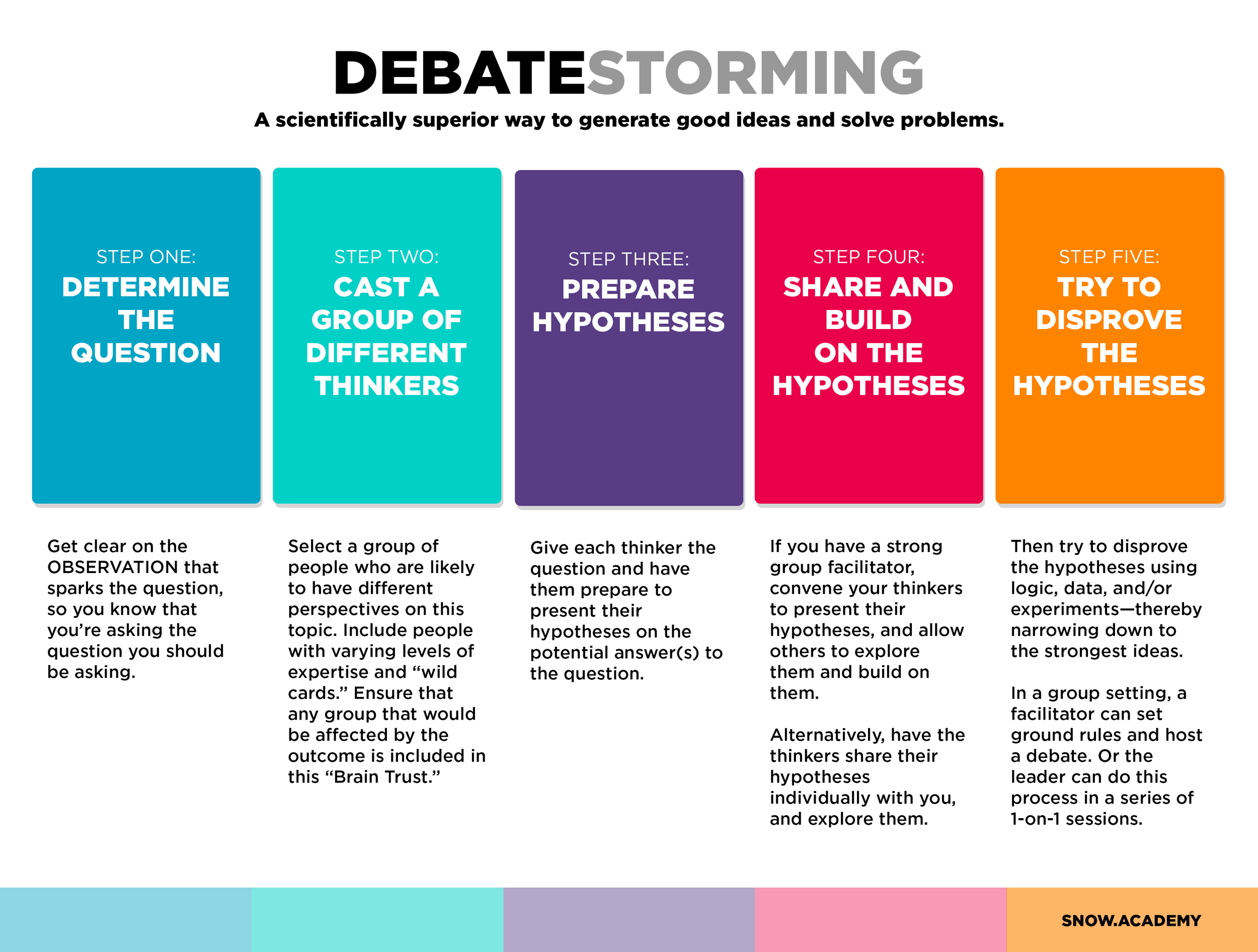 Note from Shane: In my book Dream Teams I discuss how to harness the conflict between people with different ideas—and how debate is better for problem solving than brainstorming. Some readers have asked for more concrete steps for having or hosting a productive debate in a business setting, so in this post I’ve decided to lay down some rules for doing just that.

There are three kinds of debates. Most people aren’t very good at the one that works.

The second-worst kind of debate is the kind we engage in most often. It’s the debate where the goal is to prove that you're right. E.g.:

This only makes sense if

This debate often results in the most powerful or persuasive person getting their way, rather than the best solution winning out. And it doesn’t do any good if you’re trying to find novel solutions to problems.

An even worse kind of debate is the kind where the goal is to destroy someone.

This is very rarely productive. E.g.:

Often the above two kinds of debate happen because, as mathematician and behavior researcher Spencer Greenberg points out, the debate is “really about your group identity, not about the content of the disagreement per se.”

In other words, “what the argument is really about is whether my group is better than your group.” That’s a debate that’s not likely to yield progress.

The best kind of debate, on the other hand, is the kind where the goal is to make progress together. The process of this debate often leads the group to explore ideas that no one member could have come up with on their own.

The problem is that debating the productive way is harder than the other two ways.

This is one part human nature, one part societal bad habit. Arguing that we’re right—and taking out our opponents—is in our DNA; it’s how we picked leaders and survived back in caveman times.

But even today, we reward people for persuading us that they’re smart because they have the “right” answers—from kindergarten to the C-suite.

We don’t teach kids to argue in ways that get people to think and rethink. We train them—especially by example—to argue that they’re correct.

An evolved thinker, though, will recognize that a group of people can only become smarter than its smartest member by mashing different viewpoints together.

This is why research has overwhelmingly shown that a good debate is more productive than a group brainstorming session.

So how do we have that kind of debate? It takes three things:

3 Keys to A Productive Debate

A GOOD DEBATE REQUIRES the following:

Though it’s everybody in a debate’s job to keep these three things in mind, it helps to have a leader or host whose job is to gently encourage and enforce them.

A productive debate can involve any number of participants, so long as they participate fully and thereby don’t leave potential ideas on the table. There’s no universal “right” number of people for a debate—though two is the easiest to manage, especially if there’s a chance that people might hold back in front of a larger group.

Below, I’ve put together 5 main ground rules for hosting a debate that works—and 5 tips each for encouraging cognitive friction and intellectual humility—based on years of researching the principles of breakthrough collaboration for my book Dream Teams:

Research study after research study shows that a traditional brainstorming exercise is usually inferior to just having people brainstorm on their own. Turns out that the social dynamics of a group usually leads members to hold back (consciously or inadvertently) when they’re asked to come up with ideas together.

A good facilitator can help counteract this effect (if they focus on including people who are more quiet, and managing people who are more vocal), and there are clever interventions that can make a brainstorming session more interesting (like starting off with some sample ideas that are really extreme). But study after study shows that the best way to come up with good ideas as a group is not to just blurt out ideas together—it’s to have a debate. The goal should not just be to come up with ideas; it should be to build off of ideas and then try to poke holes in them, so you can discover even better ideas.

I suggest a debate process that roughly follows the Scientific Method, with a little bit of improv comedy “Yes And.” Added together, I call this method, “Debatestorming.” Cheesy, I know. But you get what it is!

Here’s a breakdown of how Debatestorming works:

To learn about all the ways debates can veer off track and how to prevent productive debate from going off the rails, dig into my mega-article about intellectual dishonesty here.

Of course, it’s easier to talk about hosting a productive debate than to actually do it. For in-depth training on conflict and debate skills and more, check out my innovation courses at Snow Academy.