5 Of My Favorite Innovation Tips... From Picasso 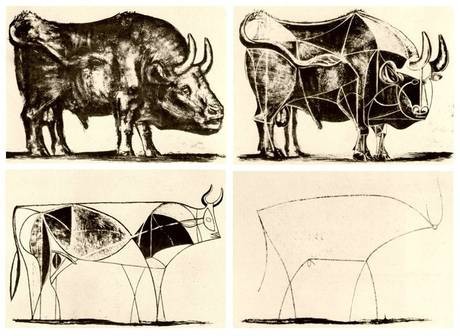 This week, The New York Times pulled the curtain back on Apple Computer's "University" secretive training program for internal employees. The primary reveal was a surprising devotion to Pablo Picasso.

Apple is well-known for minimalist product design; its notebook computers are carved from a single block of aluminum to eschew seams. Founder Steve Jobs was fond of the saying, "Simplicity is the ultimate sophistication."

But it's the Spanish painter and inventor of Cubism to which new Apple employees today pay design homage. A striking example leaked to the Times is a series of lithographs in which Picasso deconstructs an intricate drawing of a bull into a few thin lines:

It's not hard to see the same pattern in the evolution of Apple's products:

Picasso's work is often mocked for its periodic bizarre-ness. But the man was a genius who invented new forms and crossed multiple disciplines, from sculpture and painting to poetry and playwriting. (And as I recently wrote about, genius sits at the intersection of smart and crazy.) Picasso's art consistently outsells all other artists in the world at auctions, and more of his paintings have been stolen than any other artist.

Apple makes its employees study this master artist for good reason. Here are a few things that I think the rest of us can take away from Picasso's art and philosophy:

Common sense would tell us that more money, time, or tools correlate with more progress, or make us more creative. However, creative breakthroughs are often a byproduct of restricting those things. Picasso pioneered new art forms by denying himself of luxuries, thus forcing more creative rethinking of fundamentals, which is what "innovation" really means.

For example, which of the following challenges is easier?

Quick, make up a joke!

It's a crude example, but for most people, the knock knock joke is much easier to come up with. That's because the constraints around the joke's format helps you focus your creativity. It's the same reason that haikus are some of the most powerful poetry. It's the reason Twitter took off in such a noisy media environment.

For a long time I limited myself to one colour—as a form of discipline."

As we saw with the bull and Apple mouse examples, innovation is often an exercise in reducing complexity. A ton of work went into both projects, but the end products are beautiful because the artists (Picasso and Apple) hid the complexity from the end user. Steve Jobs was notoriously demanding on this front, and his products showed it. (There are numerous inside tales of things like product designers showing Jobs something that they'd reduced from 10 to 4 buttons, and Jobs telling them to get rid of more buttons.)

Want to be a better writer? Cut your sentences in half. Want to be a more interesting conversationalist? Ask concise questions. Want to build a better business? Simplify something.

Every act of creation is first an act of destruction."

Picasso wasn't a lucky artistic nut at the right place and time; he was one of the most prolific artists of his day. When others waited to see how their paintings would sell, he made more paintings. While others agonized over a single idea, he drew dozens of iterations of the same thing until he got it right.

Many of us spend way too much time protecting our perfect idea—the first thing that came out of our precious brain. Great creators like Picasso, on the other hand, produce millions of variations of their ideas until they get it right.

"Action is the foundational key to all success."

“Only one person has the right to criticize me. It’s Picasso.”

So said Henri Matisse, Picasso's contemporary and rival. The two artists studied each other's work and raced to beat one another to market with fresh ideas. This competition led Picasso to push himself and the form further than he might have on his own. Similarly, the presence of a competent competitor can be one of the biggest motivators in business, sports, etc. For those who don't have competitors on hand, painting a target on the back of someone in a higher league can be equally motivating.

After years of rivalry, a beautiful respect grew between Picasso and his rival. Said Picasso,

All things considered, there is only Matisse.”

Picasso is best known for his surreal paintings and bizarre portraits of people and animals. He wasn't afraid to break convention or to tread unknown territory. By definition, every breakthrough in any industry has followed this pattern.

"Anything you can imagine is real."